Welcome to the home of WinModbus.

Test and simulate modbus links from Windows with our Winmodbus simulators.

Buy the slave and master simulators individually or get them both together for a much reduced price. (If you already have one and want to purchase the other, let us know and we can offer you a reduced price)

When you buy one of our apps, this entitles you to upgrade to all future versions of that app at no extra cost. 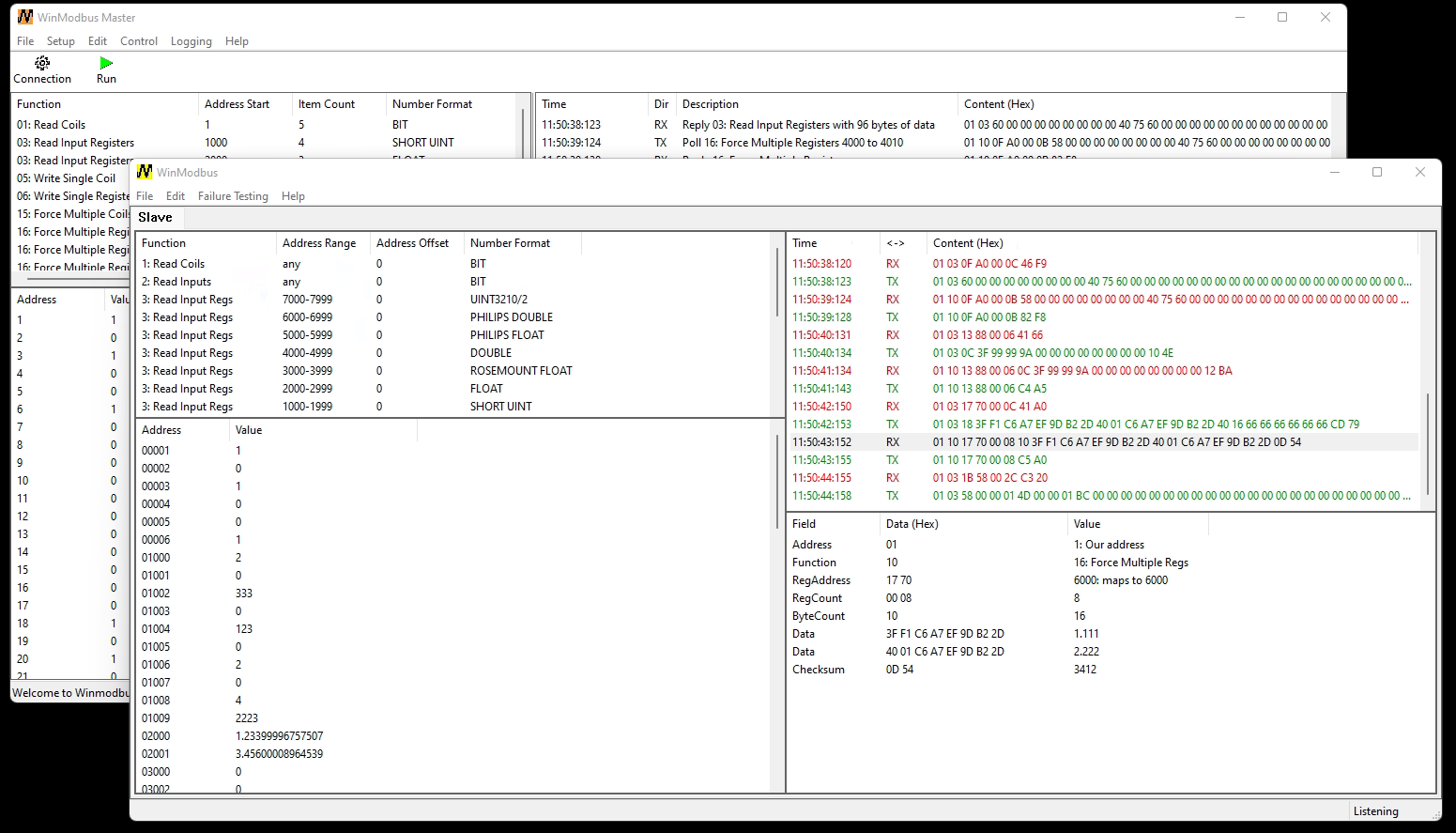 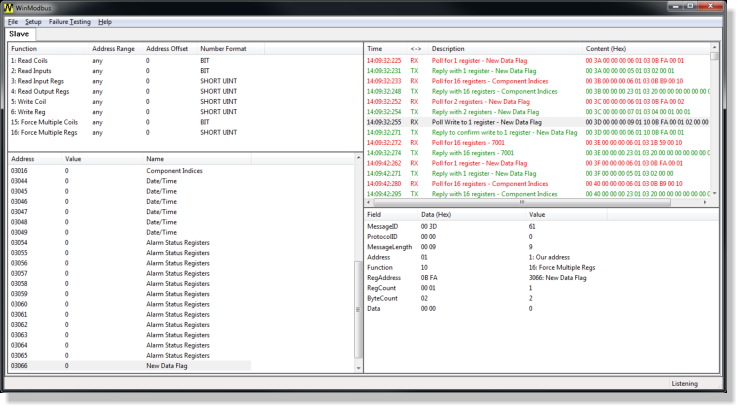 Create the connection to the modbus master

Select [Comms] from the [Setup] menu.

Enter the modbus address WinModbus should reply to. Your options are:

Select Network or Serial and enter the relevant setup information for the transport you have chosen.

For network, the standard ModbusTCP listen port is 502. For serial, you can set baud, parity and stop bits here as well as serial port. Data bits is automatically set depending on whether you are using Modbus ASCII (7) or not (8).

WinModbus only displays the currently available serial ports.If your serial port isn’t appearing in the list, ensure it is not in use by something else.

Note: You can mix Modbus TCP/RTU with serial/ethernet links which is useful for scenarios where you may be using a network terminal server to talk to a serial device.

You can click on any message in the traffic window to see a breakdown of what it means (bottom right). WinModbus will attempt to parse any message as a valid Modbus message but will display an appropriate error message if this is not successful.

WinModbus will only reply to a modbus request that matches a corresponding Function Range. Function Ranges are shown top left and they each specify a modbus function code and a range of addresses. Supported modbus functions are : 1, 2, 3, 4, 5, 6, 15, 16, 65, 66, 67, 68 and some function ranges are added by default to answer all of these.

By default, WinModbus will reply to all value requests with 0. To specify some valid data, you can create data items in the Address map (bottom left). 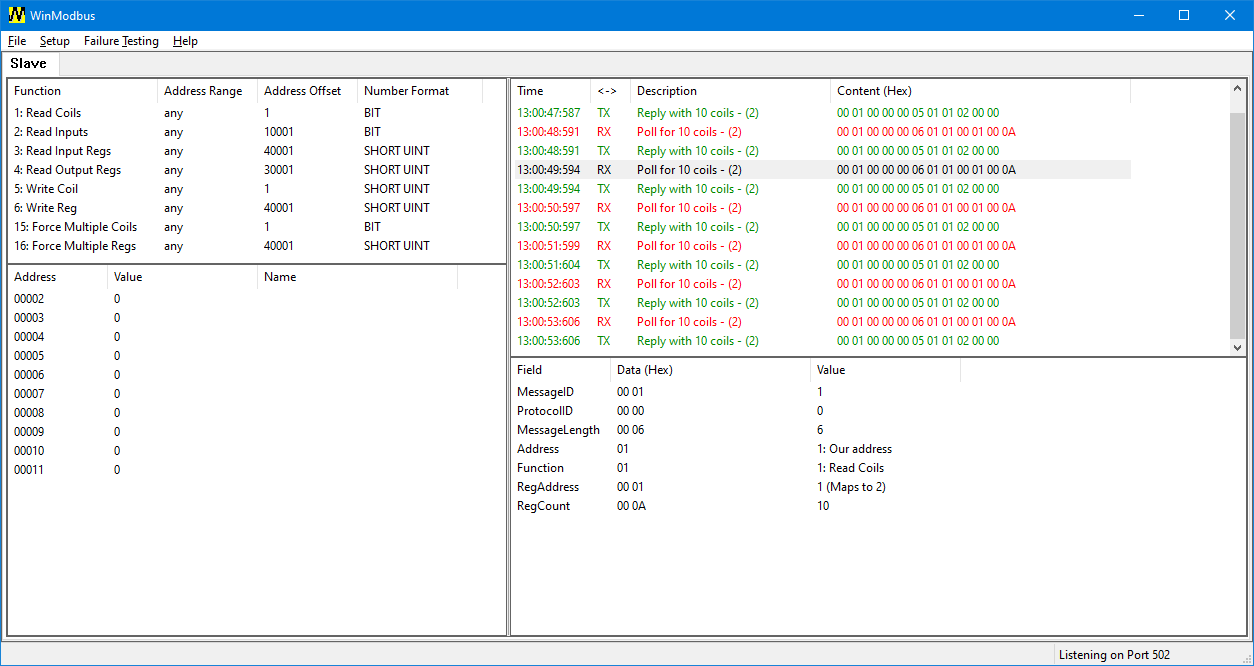 Specify how Winmodbus should reply to specific functions

You can add, delete and modify Function Ranges by right clicking in the top left window and selecting from the popup menu.

Optionally you can specify a range of addresses to restrict this message to. This is useful if you have an address map that returns data formatted differently depending on the address. e.g. you may have 100 integers followed by 100 floats, all available via function 3. As these are represented differently, they will need to be packed in the message differently and WinModus supports this by allowing you to add several Function Ranges per function. If you just have one data type no matter what the address, tick the “Any” box and this function range will be used to reply to all messages with the selected modbus function code.

When a message is received, it is tested against the function ranges from top to bottom so if more than 1 could potentially match, the topmost is used. To this end, you can move each range up and down in the list. You may want to have a resticted address range for a function, say 0 -> 1000, and then below that you could have a catch all with "Any" address set.

Finally, you need to specify the format of the data you expect in the message. There are several commonly used formats in the Format Presets chooser so you should probably pick one of those. Each format has an implied byte ordering. e.g. SHORT10 expects a two byte short, MSB* first. SHORT01 is the same but LSB first. FLOAT3210 is a 4 byte float MSB first down to LSB. If none of the presets are suitable, you can manually specify the data format, addresses per item and whether to use the Count field in the message to specify the number of data items in the message, or the number of 2-byte modbus registers. e.g. If a message contains 3 floats, the count field may be set to 3 (Tick the box) or, because a float takes up two modbus registers, it may be set to 6. (Untick the box)

WinModbus recognises functions 1, 2, 3, 4, 5, 6, 15, 16, 65, 66, 67, 68. Winmodbus is currently unable to decode any function other than these and will show an error. If you poll it with one of these functions but don't have a message range defined for it, WinModbus will reply with a function exception (e.g. the function with the top bit set followed by the exception code 1) 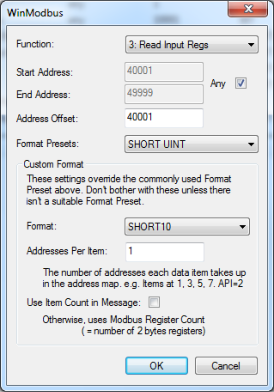 Right click on the Address window (Bottom left) and select [Add Addresses]. Specify the start and end address and an address step (e.g. an address step of 2 will create alternate addresses) and these addresses will appear in the window.

Double click on any address to set that address to a value. Note, you can select several addresses while holding the SHIFT key down, then right click and select [Edit Addresses] to set multiple addresses to a single value in one step.

Note that the address in the actual messages may not be the same as the ones in the data map. Modbus can apply an offset for each function. This mapping is done in the relevant function range and you’ll see that defaults are set up for you. (Top left window)

WinModbus has an autocreate function which will create the addresses in your datamap for you everytime you are polled (if they don't already exist). This way you can create your datamap quickly, just by being polled.

Read and update values from Excel or similar.

You can link to any data item in the address map using DDE.

So, for instance, in an Excel cell, you could get an updating value of register 10001 by inserting something like:

You can't do a DDE write directly within Excel but you can do it using the built in VB script.

If you wanted to update a fixed address 10001 with a value from cell “A1” in Excel, you could do it with the following bit of VB: 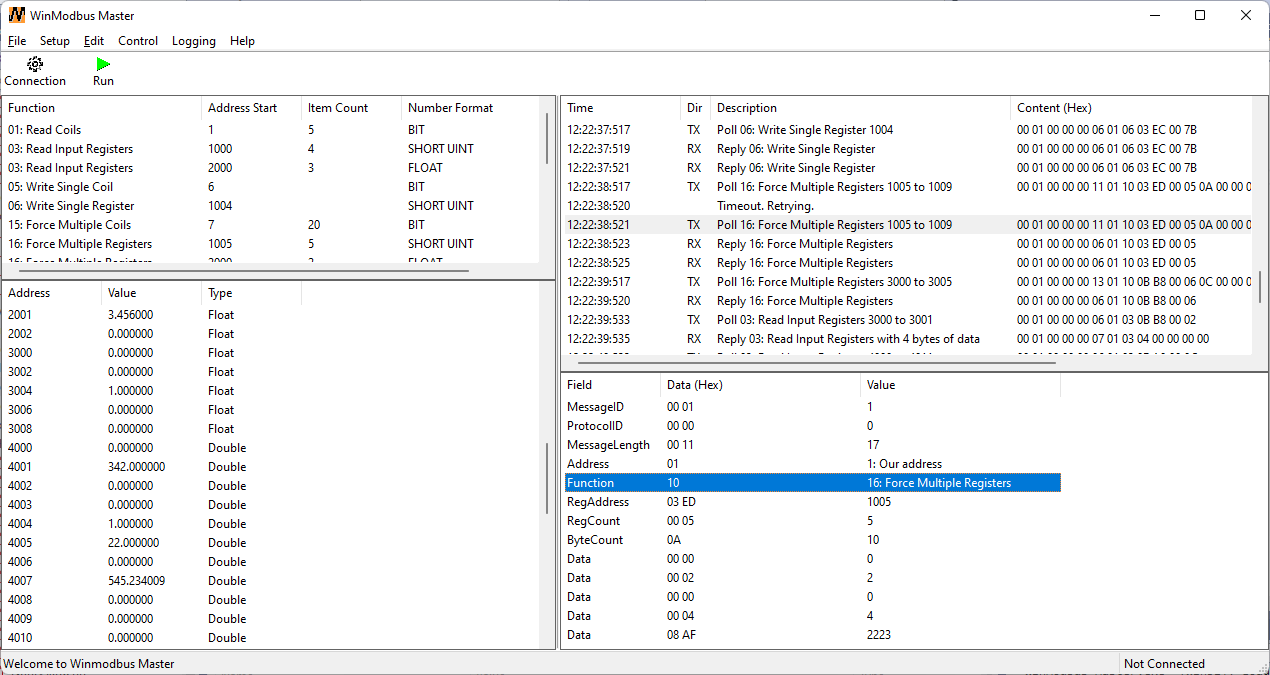 Winmodbus Master can communicate over TCP/IP or Serial.

From the main menu, select [Comms Parameters] from the [Setup] menu and you should see a dialog allowing you to define the comms channel to the modbus slave.

IP address and port should be defined. You can also use a hostname in place of the ip address.

Choose from one of the available COM ports listed and set serial parameters. Ensure the same Baud rate as the Slave is using. Parity is usually None and Stop Bits is usually 1.

The protocol can be Modbus TCP (includes a 6 byte header) or Modbus RTU (No header. 2 byte CRC on the end).

You must specify a modbus address to poll for and this should correspond to the address of the slave you are connected to.

The Timout is the number of millliseconds waited for a reply after a poll is issued before giving up and either retrying or going on to the next poll.

The Retries specifies how may times a poll should be issued if it is timing out before giving up. 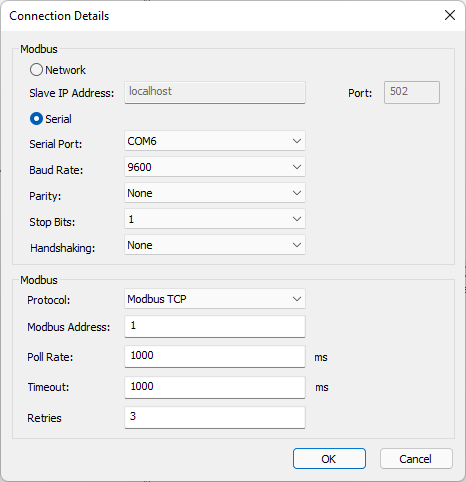 The top left Window is the poll definition window.

To create a poll, right click in the top left window and select [Add Poll]. Pick the modbus function code to poll and the start address to poll. Enter the number of items to poll for (if the function code you chose supports it) and indicate what format the data should be sent as (for write function codes) or decoded as (for read function codes).

If you select [run] from the toolbar or the main menu, each message in the top left window will be polled in turn starting at the top and moving down to the bottom. This will be continuous, wrapping back to the top until [run] is selected again to stop the polling. Polls can be reordered by moving them up and down in the list using the right click menu.

FInally, from the right click menu you can automatically add all the addresses polled by this poll to the address map (bottom right window).

The Address Map Window is the bottom right window and shows a list of the addresses and their corresponding values. The address map is initially empty and addresses have to be manually added/defined although helpers exist to do this automatically for each poll/message shown in the other windows.

Each address in the map has a basic type, so BIT, DOUBLE, FLOAT, LONG or SHORT. These correspond to the types of data Winmodbus Master supports for modbus messages. Note: these are slightly different from the types specified in the poll definition as they do not need any indication of how they are encoded/decoded. They should correspond to the type polled for, so a poll for some sort of float (DANIEL, ROSEMOUNT, etc.) at 1000 indicates you should have FLOATs in the address map at the addresses covered by the poll.

Address values can be changed by double clicking on the address and entering a new value in the dialog that comes up. 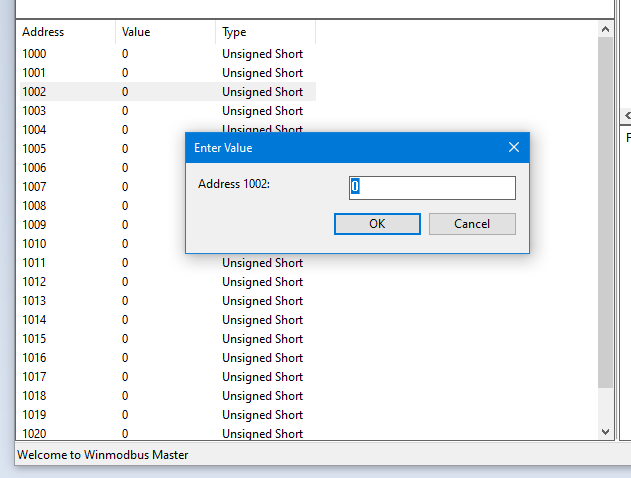 Read and update values from Excel or similar

You can link to any data item in the address map using DDE.

So, for instance, in an Excel cell, you could get an updating value of register 10001 by inserting something like:

You can't do a DDE write directly within Excel but you can do it using the built in VB script.

If you wanted to update a fixed address 10001 with a value from cell “A1” in Excel, you could do it with the following bit of VB:

Interacting with data from your browser

Winmodbus master now contains a simple web server which allows you to view and change data from a browser or similar.

From the connection details [Setup/Comms parameters menu], you can set the port that the internal web server listens on. Setting this to 0 will disable the server.

If you set it to, say, 8000, you should be able to run up your browser and go to http://localhost:8000/ and see something like the following:

All replies are in json.

Reading data is done by first subscribing to a list of addresses and the calling update to get changes to those addresses.

This will return json as follows:

This returns json containing link status and an array of change values, each an object with name (address) and new value:

Attempt to write a value to an address. In the above example, 123 will be written to address 1000 if it exists. The next call to update will reply with the new value against address 1000 if the write works (and address 1000 has been subscribed to)

Winmodbus Master contains an example html file with some internal javascript to show and update values. Clicking on a value will allow you change it.

"The price of WinModbus has been frozen since 2016 and includes email support and free lifetime upgrades to all new versions, where we add new functions and ensure our applications stay working with the latest versions of Windows. We can't guarantee to maintain the price freeze forever so please get your copies now while they are very competitively priced. Many thanks for considering WinModbus. We really appreciate your custom." - Gary Whitehead, Lead Developer.

If you have already purchased an individual product and wish to upgrade to the Suite, just drop us an email at winmodbus@abbeytek.com and we'll be happy to offer you a reduced price.