From the main menu, select [Comms Parameters] from the [Setup] menu and you shoudl see a dialog allowing you to define the comms channel to the modbus slave.

IP address and port should be defined, using localhost or 127.0.0.1 for the same machine. The protocol can be Modbus TCP (includes a 6 byte header) or Modbus RTU (No header but a 2 byte CRC on the end). The latter is useful for communicating with serial modbus devices using a terminal server or similar.

You must specify a modbus address to poll for and this shoudl correspond to the address of the slave you are connected to.

The Timout is the number of millliseconds waited for a reply after a poll is issued before giving up and either retrying or going on to the next poll.

The Retries specifies how may times a poll should be issued if it is timing out. 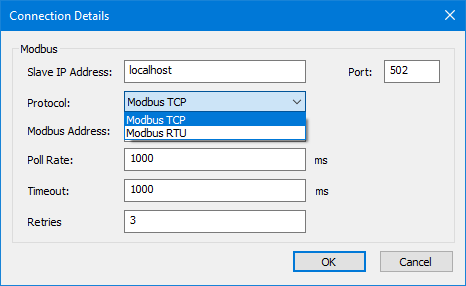